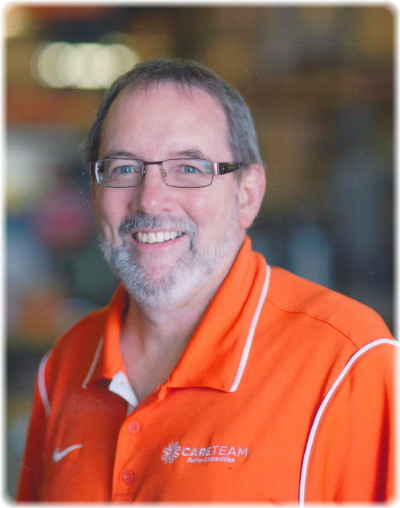 On November 16, 2021 at the age of 62, Rocky Allen Stoltz, surrounded by loved ones and critters, passed peacefully in his home after a hard fought battle with cancer. Rocky’s Mass of Christian Burial will be at 10 a.m., Monday, November 22, 2021 at St. Joseph’s Catholic Church, Dickinson with Fr. Keith Streifel as celebrant. Interment will take place at the Stoltz Hilltop Family Cemetery. Visitation will be on Sunday from 1 p.m. to 2 p.m. at Ladbury Funeral Service, Dickinson with a rosary and vigil at 2 p.m. with Deacon Ross Reiter presiding.

Rocky Stoltz was born in Dickinson on September 1, 1959. He was the son of Paul and Wiletta Stoltz. He grew up on the family farm southeast of Dickinson with his eight siblings.

He graduated from Dickinson High School in 1977 and went on to ND State School of Science where he studied Mechanical Drafting and Design. After completing his degree, he accepted his first job with  FMC Corporation in Cedar Rapids, IA.

Not long after starting his career, he married his high school sweetheart, Lorri Fisher, in Dickinson, on October 3, 1980. They  later moved to Ashley where they both accepted jobs with Blumhardt Mfg. Two years later, they moved back to Dickinson where he was employed at General Steel and Supply, Fisher Martin Inc, and lastly, employed for 22 years at Steffes Corporation, first as a New Product Development Engineering Manager and then as the Senior Design Engineer.

In 1986, Rocky and Lorri began their own family with the birth of their first daughter Molly, followed by Jakee and Madeline. His kids were the center of his world. In 2020 the best thing ever arrived in his life- his two grandbabies Cason and Juniper, who he adored.

Rocky’s kids later became the inspiration for his home brewery, “MoJaMa”. Homebrewing was his passion and he co-founded Dickinson’s homebrewers club, Heart River Homebrewing. His passion for beer was well known and his travels always involved searching for local micro breweries. Rocky was rarely found sitting still. There was always a project in the works, and he was always ready to lend a helping hand. He was the master of DIY, loved woodworking and designing, and created many beautiful pieces. He loved a good game of golf and a rousing game of pinochle. In recent years he was coined the “Reluctant Rescuer” to support his wife’s passion for rescuing animals. Despite his protests, he graciously shared his home and affections with many rescues including one that never left – his favorite dog Lucy.

Rocky loved to be involved in the Dickinson community. For many years, he served on St Joseph’s School board as President, and was a long standing  member of Knights of Columbus where he held many offices including Grand Knight. He also enjoyed assisting in building theatre sets for Trinity High School theatre productions. Many people in the community knew and loved him, and he showed his love for the community through his loyal service to it.

He was preceded in death by his parents, Paul and Wiletta Stoltz; and his brother-in-law Pat Pierce.

In lieu of flowers, memorials are greatly appreciated to the Rocky Stoltz Memorial Fund for Trinity Fine Arts.