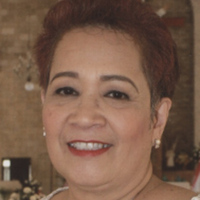 Epifania Moor-Brezini, 64, Minot and formerly of the Philipines died on Monday, November 15, 2021 in a Minot nursing home.

Epifania Trajeco Bamberger was born on April 7, 1957 in San Jose, Antique, Philippines to Louis O. and Dominica (Trajeco) Bamberger. She was raised there and in Minot where she graduated from Minot High School in 1976. She became a United States citizen in 1981.

Epifania was once married to William David Moor who was stationed with the U.S. Air Force in Minot. They were the parents of three sons: Herbert, William and George. Epifania was a stay-at-home mother prior to beginning her career as a cook and kitchen manager. She was employed at the NCO Club, Roughrider Pizza, Sleep-Inn and had kitchen management duties in addition to cooking at Denny’s and The Wellington.  Following her divorce she moved to North Carolina in 1993, but returned to Minot in 1994.  While venturing abroad in Europe she married El Hadj Brezini in 2005. She had since resided in Minot.

Epifania was a member and officeholder in the Filipino – American Association.

Epifania is survived by her sons: Herbert, William and George all of Minot and siblings: Corazon B. Durana, Ramon Bamberger, Albert Bamberger, George Bamberger, Lourdes B. Clevenger and Elena B. Sebastian; half siblings:  Herbert, Carlos, Eddie and Janette Bamberger and numerous nieces, nephews and cousins.

Epifania was preceded in death by her parents, sister: Rosalina B. Saldajeno and half- brother: Joseph Bamberger.

Memories and condolences may be shared at www.thomasfamilyfuneralhome.com.