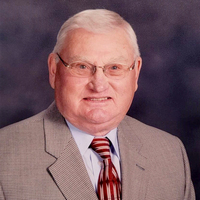 Meiny was born January 11, 1927, in Mercer, the youngest of six children, and the last living sibling, was born to Christ and Maria Kleingartner. He attended country school in the rural Mercer/Brush Lake area.

As a member of the Hope Lutheran German Church, he was the first of his family to be confirmed in English: and remained bilingual his entire life.

He married the love of his life, Elizabeth (Betty) Carr, October 31, 1946. To this union, three children were born: Ron, Leon and Remar. They farmed near Brush Lake/Mercer for 12 years.

In the Spring 1958 they moved to Bismarck and Meiny began working for Eddy’s Bakery. After which time, he was employed within many men’s clothing stores, Shark’s Men’s Store, Vantage Point, and Herberger’s men’s store, ultimately retiring from Missouri Valley Motors in 1985.

Meiny was a lifetime active member of Trinity Lutheran Church.

He was preceded in death by his wife, Betty; his parents; three brothers, Emil, Ted, and Leonard; and two sisters, Edna and Helen.

Meiny’s 94 years truly was a happy, fun-filled life and he did his best alone after losing Betty, his partner and best friend of 66 years.

His quick wit and eagerness to “visit” endeared him to all encountered over the years and he will be missed by so many friends and family.