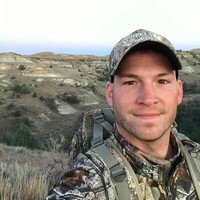 Brett was born June 12, 1990, in St. Cloud, Minnesota, to Edward and Lesly (Conley) Naill. He grew up in the St. Cloud area and graduated from Becker High School in 2008. He went to Vermillion Community College in Ely, Minnesota, and attended the college’s police academy. After graduation, he accepted a position with the Bottineau Sheriff’s Department.

While living in Bottineau, he met and married his wife, Kristyn Nelson. They were married on December 2, 2014. Brett and Kristyn moved to Bismarck in January 2015, where he took a position with the Bismarck Police Department. He held many positions in the department, including patrol, detective and was a member of the bomb squad. Brett recently left law enforcement and started a new career at Pinnacle Engineering as an Environmental Field Tech. He was a father of two boys, Henry and Reed.

Brett loved the outdoors and often took trips to go hunting and fishing.

He was preceded in death by his brother, Cody; and grandparents, Edward and Alida.