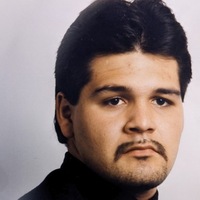 To view a livestream of the service access: www.fbcminot.org

Donovan was born in Rolla on January 29th, 1974. Donovan attended school at Glenburn Elementary School and later Lab-Class Elementary of Minot, ND. He also went to school in California and Maryland. Donovan loved to spend time with his siblings and relatives around the United States. He loved computers when he was younger and even helped to instill that love in his brother, John. Donovan loved the beach and visited both the Atlantic and Pacific oceans. When his parents moved, He stayed with his grandmother Lucille in Minot, ND, while attending his last school year. Donovan attended Job Corp in the early ’90s, where he learned automotive work and how to be a chef. Donovan had his first child, Austin, at the age of 23. As a young adult, he did some computer work as well as locksmithing.

Donovan met many people he considered friends throughout his life, and he would frequently do whatever he could to help them out when they needed it. In 2014 he survived a heart attack and was diagnosed with diabetes; however, he did not allow this to slow him down. Donovan returned to Minot in 2016 to be closer with his son and remained here. In 2017, he started dating his girlfriend of several years, Brenda Logelin. Donovan worked as a chef in town at a few restaurants during this time as well.

Donovan is survived by his son Austin Stensby of Minot, ND, and his daughter Leta Dobler of SD. His parents Sharon and Jake Beatrez of WV; brother John and (Meghan) Beatrez of VA; sister Heather Beatrez of WV; girlfriend Brenda Logelin of Minot, ND along with numerous other relatives.

Celebration of Donovan’s Life:  2:00 p.m. Friday, November 19th at First Baptist Church located at 200 3rd St. SW, Minot, ND 58701. All friends and family are welcome. Pastor Kent Hinkel will officiate the service. To view a livestream of the service access: www.fbcminot.org
Flowers and memorials may be sent to the church.