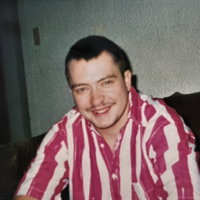 Loving father, son, and brother Kenneth A. Schock passed away on Nov. 3, 2021 at the age of 50. Ken joined his Heavenly Father after a battle with cancer, he was surrounded by his family who will continue to honor his legacy by striving to be the honest and caring person that Ken exemplified.

Funeral services will be held 1 p.m. Thursday, Nov. 11 at Parkway Funeral Service, 2330 Tyler Parkway, Bismarck. Visitation will be one hour prior to the service.

Ken was born on November 21, 1970, the son of Mary Lou Stroh and Paul Nissen. Ken was mainly raised and educated in Bismarck. He resided with his father and family for a short time in Rock Springs, Wyoming. Ken attended Job Corp, where he received his GED and his welding certificate. Upon returning from Job Corp Ken worked at the Bismarck Tribune, Caspers East 40 and volunteered at the ND State Capitol.

It was on December 7, 1993, Ken took on his favorite job, as stay-at-home father to Brandon, from the numerous pictures of a smiling father and son, it is clear to see he loved being a dad.

Ken would tell you that a turning point in his life was when he found Christianity, his faith was unwavering. Up until his last days, he would offer his prayers up to anyone who was struggling despite the struggles he himself was going through. Ken enjoyed sharing the Word by giving away Bibles to anyone who he thought might accept or benefit from the readings. During his last months, when he was asked how he was coping, his answer was “I give it all to Him,” pointing to a picture of Jesus.

Ken enjoyed spending time with his son, girlfriend, friends and family conversing, watching movies and listening to music. He had a great sense of humor; he loved to laugh and his laugh was contagious. More than he enjoyed laughing he loved to make others laugh, whether it was by telling a dad joke or playing an innocent prank, when you laughed Ken’s smile just grew bigger and a fist bump was sure to follow.

His greatest accomplishment isn’t found in a college degree or moving up in a career, it is found in his character. He exemplified honesty, happiness, faith and unconditional love. Spending time with Ken brought a sense of peace and acceptance that we all search for. In August of this year, Ken was diagnosed with cancer. He was a silent sufferer; he never complained and always shared a smile that reached his eyes and touched the heart of everyone who came into contact with him. His family was able to care for him during the last three months of his life, returning the unconditional love that Ken had shown them. These last months were where Ken’s light shown it’s brightest, his laughter, unconditional love and faith were almost palpable. His family described time spent with Ken as a place where the presence of God was felt. Memories of people are often found in feathers or pennies on the ground, Ken requested that he be remembered whenever you see a Bible.

He was preceded in death by his father, Paul Nissen; and nephew, Randall Albaugh.