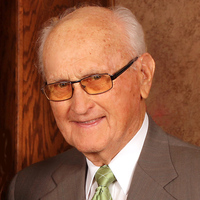 A livestream of the service can be accessed by going to https://bethanylutheran.tv/

Al was born June 26, 1931 at Cathay, North Dakota, the son of Fred and Pauline (Beck) Dietz. He was raised and educated in Cathay, graduating from Cathay High School in 1949. He attended the Gale Institute in Minneapolis, MN for a time.

Al started his employment with Burlington Northern Railroad in Heimdal, ND. While there, he met Shirley Johnson who he was united in marriage to on November 10, 1957.

Al and Shirley made their home in Minot where Al continued his fulltime employment with the railroad. He also started his fulltime education at Minot State College and received a degree in Business Administration. All of that was accomplished while also starting a family. They then moved to Devils Lake and he was employed with the Internal Revenue Service. He later worked for Broker & Hendrickson Accounting Firm in Fargo. In 1969, they returned to Minot where Al fostered the development of the Trust Department at American State Bank. In 1985, he became employed with Dean Witter Reynolds locally until retiring in 1996. After his retirement, he started the Dietz Evergreen Tree Farm, which he enjoyed immensely. He was proud of all his evergreens that he planted in, and around, Minot.

Al was preceded in death by, his parents, brothers, David, George and Robert and sisters, Eleanor and Lorene.

Celebration of Life service: Thursday, November 11, 2021 at 11:00 a.m. in Bethany Lutheran Church, Minot. A livestream of the service can be accessed by going to https://bethanylutheran.tv/
Private Interment: Rosehill Memorial Park, Minot.
Visitation: Wednesday, November 10th from 4:00 – 6:00 p.m. in the Thomas Family Funeral Home, Minot.
Memorials:  In lieu of flowers or plants the family prefers memorials to the Al and Shirley Dietz Scholarship Endowment at Minot State University or to an organization of the donor’s choice.