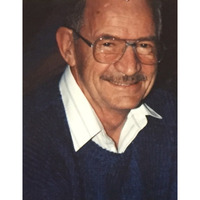 Norman Lee Fetch, 91, Bismarck, died October 29, 2021, in the company of family at Edgewood Village where he and his wife Mary resided the past five months.

Funeral services will be held 11:30 a.m. Thursday, Nov. 4 at Parkway Funeral Service, 2330 Tyler Pkwy, Bismarck. Visitation will be held one hour prior.

Burial will be held 2 p.m. Thursday at the North Dakota Veterans Cemetery, Mandan.

Norman “Norm” was born on September 15, 1930, on a farm south of Beulah. He was the second of nine children of Frank and Freda (Buchmann) Fetch. His family moved to Bismarck when Norm was 13.  Norm grew up in Bismarck, attended St. Mary’s school, and spent summers working on his uncle’s farm and neighboring farms.  Norm began working for the Bismarck Tribune in November 1947, at the age of 17.  He started in the Tribune’s mailroom, working on newspaper distribution and delivery of commercial printing materials.

Norm was serving in the North Dakota Army National Guard when he was drafted into active military service.  He served in the Army from May 28, 1953, through May 27, 1955, attaining the rank of Corporal.  He attended cooking school and graduated near the top of his class.  His duty assignment was as a cook at Ft. Riley, KS.  Upon his discharge from the Army, he returned to complete his service in the National Guard, and he returned to employment at the Bismarck Tribune.  He became a printer apprentice at that time, and then a journeyman printer in 1960.  He was a printer, linotype operator, and proofreader.  Norm was so adept at his job as a printer he could read type upside down proficiently.  In 1980, when the Tribune’s new building was completed, Norm became the building services supervisor, a position he held until retirement.

Norm enjoyed a long, illustrious career working for the Bismarck Tribune, a career that exceeded fifty years!  In fact, he worked there 52 years.  In 1998, Norm was inducted into the Bismarck Tribune “50-Year-Club”.  An article featuring Norm noted, “The Tribune is 125 years old this year, and Norm has been there for 50 of those years.  There have been just nine publishers in Tribune history.  Norm has worked for six of them.”  Norm’s notable accomplishment of loyalty and hard work through those fifty plus years will forever remain a part of Bismarck Tribune history.

In 1963, Norm was elected president of Local 140 of the International Typographical Union.  He received a letter of congratulations from the legendary United States Senator Quentin N. Burdick.

Norman married Helen Neibauer in Huff, ND, on November 20, 1951.  They had three sons and a daughter; Myron, Victoria (Vicki), Robert (Bob), and Arlen.  They later divorced.

Norman later met Mary Gilbertson at a dance.  The two instantly clicked.  On February 24, 1965, Norman and Mary were married in Selby, SD.  They had two sons, Monty and Michael.  While working at the Tribune, Norm had a second job.  He and Mary both worked for Service Master for 24 years.  Both were supervisors of cleaning crews.  Norm was a member of the Elks Club, and particularly enjoyed fine dining there with his family.

Norm and his brothers enjoyed annual fishing trips, where they combined various fun activities with fishing.  One such activity was racing remote controlled model cars.  One brother recalls that Norm’s car was always the fastest.  It’s well known that Norm loved speed, whether it was racing a bike, a car, or anything that moved.  He even moved with speed, even in his last days he had a spring in his step.  Norm had a great sense of humor, loved a good joke, and had a million dollar smile.  Anybody lucky enough to know Norman, knew he was a very special person who loved family, loved life fully, enjoyed a good meal, and would without question help anyone who needed it.  He was a bright light in a sometimes murky world.  He will be deeply missed by many.

He was preceded in death by his parents; one grandson, Jaydan Fetch, who died in infancy; three brothers, Luverne Fetch, Wilfred Fetch, and Kenneth Fetch; one sister, Dorothy Preabt;  one sister-in-law, Nancy Fetch; and one brother-in-law, Harley Preabt.