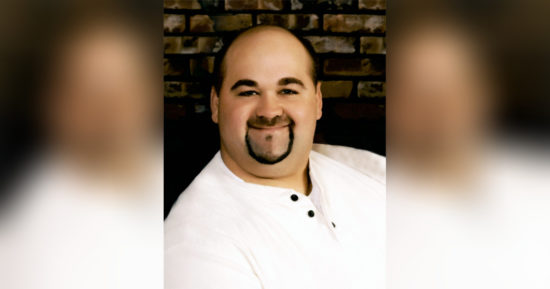 Chad Theodore Haff, 40, of Mandan, passed away Tuesday, October 26, 2021, at Sanford Hospital with both his wife and mother at his side.

A Mass of Christian Burial will be held at 1:00 PM on Saturday, October 30, 2021, at Spirit of Life Catholic Church, Mandan, ND with Father Chris Kadrmas as celebrant. Burial will be at Mandan Union Cemetery.

Chad was born at the Mandan Hospital, April 27, 1981, to Ted and Donna (Schmidt) Haff.  He graduated from Mandan High School in 2000 and earned his welding diploma from Northwest Technical College.  Chad served the community of Mandan, working at Mandan Public School District, a job he truly loved.  When things got busy and they felt they couldn’t catch up, Chad would tell the guys, “What we don’t get done today, it will be there tomorrow.”  He would laugh his hearty chuckle.  He was a gentle giant that could bring a sense of calm to every situation.

Growing up much time was spent working at the family farm.  Chad and his siblings would ride horses and four-wheelers, work cattle and sheep, and make hay.  Going on the wagon train was an exciting time. Over the years more than one hole was punched in the wall during the famous Haff WWE tag team or battle royale matches for the coveted wrestling belts.  Chad played football all through middle school and high school and was forever loyal to the Raiders.  His siblings will never forget the infamous sledding accident that resulted in Chad’s broken leg.  And they learned the hard way not to mess with the TV remote when Chad was watching his shows; you would get shot in your clicker finger, as he was an excellent aim with his BB gun.

Chad was beloved by all and will be sorely missed by his family and friends.  Chad was always willing to lend a hand or an ear.  He could offer a nugget of wisdom or a witty joke.  He was an avid hunter and fisherman.  Fall was his favorite time of year; he would always say, “This is my kind of weather!” Chad enjoyed hunting pheasants and deer, and had an unforgettable elk hunting experience in 2005.  Family, friends, and walleye were always welcomed on his boat, but a snot rocket northern pike was swiftly sent back swimming. Chad enjoyed playing softball, darts, horseshoes and was always up for a game of pinochle.

Chad married the love of his life, Kara (Orgaard) on October 3, 2009, at First Lutheran Church in Mandan.  Together they built their family.  On September 4, 2012, they were blessed with the arrival of Evelyn Marie.  Watching her grow into her unique character brought Chad great joy.  On August 12, 2015, Oliver Theodore made his entrance in the middle of the night, creating quite the commotion.  Their family complete, they lived in Mandan, but spent many hours working their farmland in southern Morton County.  He helped put in a large garden each year.  He was always excited for canning season; together Chad and Kara would put up many jars of jam, salsa, tomatoes, and peaches.

Chad had superb fence fixing skills which will be dearly missed by his wife, mother, and mother-in-law.  Most recently extra time was spent teaching Evelyn to shoot her bow and to drive the four-wheeler and side-by-side.  He was a patient instructor.  Time with Oliver was spent wrestling, having nerf gun battles and practicing shooting the BB gun.  Teaching the kids about farming, hunting, and fishing was very important to Chad.  He had been anticipating Evelyn’s first deer hunt for some time, a task he will now need to guide from above.

Chad lived life to the fullest, he was all in.  He lived the words of his Hollywood icon John Wayne, “Courage is being scared to death – but saddling up anyway.”

Chad was preceded in death by his father, Ted; father-in-law, Lee Orgaard; and grandparents, Paul and Cecelia (Gerhardt) Schmidt, and Carl and Lena (Duletski) Haff.

In lieu of flowers, donations may be made toward Evelyn and Oliver’s college fund at Capital Credit Union – Kara Haff – Haff Memorial Account.