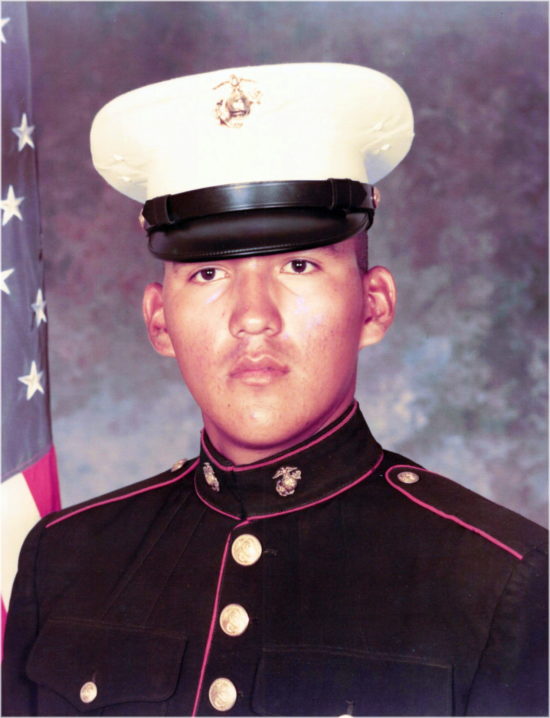 Fritz returned to the happy hunting ground peacefully surrounded by his family.

Fritz was born in Torrance, CA and lived in Norwalk, CA and moved to Twin Buttes in 1972. He attended Twin Buttes Elementary School and Halliday High School. During this time Fritz helped his uncle Willard Little Owl and Grandpa Ralph Little Owl. He Learned how to be a cowboy and was a rancher with his uncle Willard. While living with his Grandpa for a short while, he learned his Mandan ways and assisted his Grandpa NationWide to help heal the people.

Fritz was an All American Athlete. He loved Basketball and Football. Fritz enlisted into the Marines while in high school in 1976. His son Freddie Fox was born to Jackie (Fox) Danks and Fritz Packineau. He went to Camp Pendleton, CA after high school graduation. Fritzy traveled the world and was deployed and stationed at Naples Naval Base, Italy in 1977. He returned to Camp Lejeune, NC. Tamara Packineau was born to his wife Norma (Sheppard) Miller and Fritz Packineau at Camp Lejeune, NC. He was honorably discharged from the Marines and returned to Twin Buttes. Fritz was employed as Twin Buttes Police Officer and was a Fish and Game Warden. In 1983 he moved himself and Tamara to St. Paul, MN. He attended St. Paul Community College and graduated as a Welder. Resided in the Minneapolis area from 1984-2020. Retired from Northern States Power (NSP) “Black Dog Plant” after 27 years. Fritz worked as a Heavy Equipment Operator and Yuke Driver. Fritz always talked about moving home to Twin Buttes. He moved to Bismarck, ND in October of 2020.

Fritz was known to help anyone in need. Was always there to give advice and make you feel safe. Fritz was known for harsh scolding when needed but was quickly over with a meal and kind words. He protected all the women folk in his family fiercely. His nieces Shontal Lajeunesse-Mishow, Sofia Lajeunesse, Amber Lajeunesse, Fawn Packineau, and Tracy Packineau were acknowledged as daughters. Fritz enjoyed visiting his uncles Vernon and Freddie Grinnell in Rapid City, SD. They were all in the military and told stories of active duty. He attended Sundance and believed in his ways. He looked forward to hunting with his son-in-law Jorge Torres and shared many stories between the two Devil Dogs. Fritz was very close with his sisters Muffit and Tootsie. They were his backbone and comfort. Fritz enjoyed being a father figure to his nephews Calvin BullHead, Wilfred Lockwood III, and Thomas (Bug Eyes) Crows Heart. Fritz was a great cook and loved to BBQ. He held many gatherings with his family and friends.

Fritz walked the “Red Road” beginning July 2000. He is respected, honored, and always knew what to say and do. His boisterous voice and laugh could be heard in any crowd. Fritz enjoyed his grandsons and all his teachings were bestowed upon them and left his knowledge in this world with Dione, Stephan, Mateyo, Dominic. He loved and treasured his most precious gifts in his life…. His son Freddie and daughter Tamara.