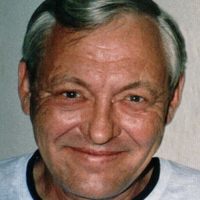 Eugene was born April 20, 1938 in Fargo, North Dakota, the son of Elword and Orpha (Ashley) Rafferty.  He was raised and educated at Fargo Shanley High, where he excelled in basketball and football.  Following his schooling, he entered into active duty service with the U.S. Navy and honorably served his country on the USS Plymouth Rock from December 10, 1962 until November 28, 1964.

Eugene was united in marriage to Anna Margaret Kopp.   They moved to Mohall, North Dakota, where they owned and operated a Tastee Freeze and later began farming while raising their five children.  Gene and Anna were married for almost 30 years prior to their divorce.

After moving to Minot in 1990, he met Mary Visina, who became his loving partner and companion until her death in 2009.   He was proud of his time working for Community Action Opportunities until he fully retired.  Gene was an avid golfer, a lifelong Vikings fan and had recently developed a new fondness for cooking and baking.  May God bless his memory.

Gene was preceded in death by his parents, his former wife, Anna Meyer; companion, Mary Visina; and brother, John Rafferty.

Memorial Service: Thursday, October 28, 2021 at 11:00 a.m. in Thomas Family Funeral Home, Minot, ND.
Interment: Rosehill Memorial Park, Minot with Military honors accorded by the U.S. Navy and Minot American Legion.
Visitation:  At the family’s request there will not be a viewing, however friends may sign the memorial register book on Wednesday from 5:00-7:00 p.m. in Thomas Family Funeral Home, Minot.