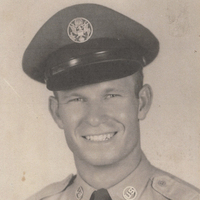 Gene was born on November 24, 1931 in Cherry Hill, AR, to Marion and Willie (Hess) Howard. He was raised and educated in Cherry Hill and Mena, AR, graduating from Mena High School in 1951. Gene didn’t waste any time before entering active service with the USAF on June 9, 1951 in Fort Smith, Arkansas. It was in the Air Force where Gene would remain for the next 26 years as a dedicated service man to his country, followed by twenty more years with the Civil Service.

It was the year of 1954 at the Eglin AFB, Florida, where Gene would meet his future wife Joan Helen Bourhill. The couple was married on July 22, 1955, at a Methodist church in Pascagoula, Mississippi. From this union four children were born, Kathleen, Michael, David, and Jeffery.

Gene’s life took him all over the world; places he called home were, Cherry Hill and Mena, AR, Lompoc, CA, Minot AFB and lastly Surrey, ND.

Hobbies that Gene enjoyed in his free time were fishing with family and friends, hunting with his brothers and the family dog, Rowster, trail riding with Peaches and Rusty, and playing with Mokie. Gene loved being in and observing nature, he could often be found watching wildlife on his favorite webcams.

A private burial with military honors will take place at the North Dakota Veterans Cemetery of Mandan.