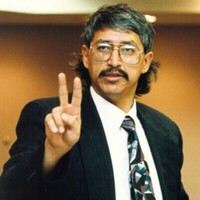 Wilbur Dale Wilkinson Sr., 73, of White Shield, North Dakota made his journey to “the place where life continues” on Saturday, October 23, 2021.

Wilbur Sr. was born in Minot, North Dakota, on October 12, 1948, to Ernest and Mollie Wolf Wilkinson. He was then adopted by Rose Crows Flies High after his mother’s passing.  He was primarily raised in White Shield, North Dakota, located on the Fort Berthold reservation. A descendant of Spotted Tail and Wolf Lies Down, he held the warrior spirit within himself. His fraternal grandfather was Mahlon Wilkinson, who served as the first Indian Agent at Fort Berthold. Upon receiving his diploma from White Shield High School in 1966, Wilbur Sr. received an undergraduate degree from Haskell Indian Junior College (known today as Haskell Indian Nations University). While at Haskell, Wilbur had his first taste of Indian advocacy by participating in the American Indian Movement (AIM) occupation of Wounded Knee. He later attended Northeastern University and the University of Oklahoma.

Intending to become an Indian Advocate, Wilbur Sr. began working for the United States Bureau of Indian Affairs in various capacities. During this time, Wilbur Sr. worked in Washington, D.C., North Dakota, South Dakota, and Arizona. While in Arizona, he met Eddie Basha Jr., the owner of Bashas’, Inc., a grocery store chain in Arizona, and worked to launch the first Bashas’ grocery store in Tuba City, Arizona, headquarters of the Western Navajo Agency.

After working for the federal government, he returned to Fort Berthold to serve his People. In November 1990, Wilbur Sr. was elected as the Chairman of the Three Affiliated Tribes. During his term, his most historic legal accomplishment was successfully lobbying for the passage of the Joint Tribal Advisory Committee (JTAC). Another significant victory as Chairman was building The Four Bears Casino & Lodge, which remains the most successful and long-standing project in MHA history. What is more, he negotiated the best gaming compact in state history for a Tribe. He also started the first Cattle Re-lending Program on the MHA Nation.

In Wilbur Sr’s later years, he took on the USDA and represented 27 families, including his own, for discriminatory practices on Indian farmers and won an 18-year battle associated with the famed 2011 Keepseagle v. Vilsack settlement. He later established Spotted Tail & Associates, a professional service firm providing expert legal advice within the domains of tribal consultation, energy and natural resources, environmental issues, and litigation. Toward the end of his career, he focused his energies on providing allottee services for tribal members.

The culmination of his lived experiences, service as a tribal leader, and work as an untiring legal advocate have prompted many to view Wilbur Sr.’s passage as “A Good Man Walks Your Way.”

Funeral services will be held Friday, October 29th at 10 a.m. at the Thompson Funeral Home. Following the graveside service at Immaculate Conception Catholic Cemetery, the family will provide a boxed lunch served at the White Shield Community Center at 1620 61st Avenue, Roseglen, ND 58775.