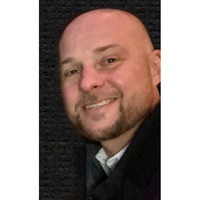 A service livestream will be available below starting at the time of the prayer service. When the prayer service becomes live, a play button will appear in the center of the black box, click the play button to view the service. With any issues, please refresh your page and/or turn up your volume. If issues persist, please contact the funeral home.

The Service will be livestreamed by St. Mary’s High School at the following link  https://smchs.org/live-stream

Brent Michael De Kok was born August 18, 1977, to Don and Sue (Koskamp) De Kok in Bismarck. Brent grew up in Bismarck attending and graduating from Bismarck Century High School in 1996 where he excelled at basketball and football. After high school, Brent played basketball at Bismarck State College, and while there, Brent met his best friend and love, Amy Steidler. Brent and Amy attended North Dakota State University together and eventually moved to the Twin Cities. Brent subsequently graduated with an associates degree in Health and Exercise Science from Minnesota School of Business.

Brent and Amy were joined in marriage on February 19, 2005 and continued to reside in the Twin Cities where Brent coached boys’ basketball and football at the Blake School for the next several years. Brent and Amy were blessed with their first child, Mya Jayne, in 2008. Brent continued to coach and was a stay-at-home dad to Mya (which he loved!). Brent and family moved back to Bismarck, North Dakota in 2010 and welcomed their second child, Bryant Michael, in 2011. At that same time, Brent was hired as a basketball coach at St. Mary’s Central High School. In 2014, Brent became the Head Varsity Coach and took his team to the State Class A Championship game that first year. Brent and Amy were blessed again in 2016 when they welcomed their third child, Charly Grace.

Coaching and guiding young men was Brent’s calling. He enjoyed the game, but his true passion was mentoring and building lasting relationships with his players. Brent made every person he met feel like they were important and valued, which he truly believed. Because of this, he had countless friends and supporters who fervently encouraged, loved, and prayed for him after his cancer diagnosis in January 2017.

While Brent is best known by most for his coaching accomplishments and acumen, his primary joy and focus in life were his three children. He poured his love and attention into them every day, even during the difficult days of cancer treatment. Brent was very active with his kids, taking them to the park to ride bike and long board on summer afternoons or shooting hoops at St. Mary’s. His kids will never question how much their dad loved them.

Brent was a faithful follower and believer in his savior, Jesus Christ, and walked a path of unwavering faith, hope and positivity over the past five years while living with cancer. He never asked, “Why me?” but rather said, “God, use me.” His daily mantra was, “let the light in you shine brighter than the light on you,” and he lived that out for the rest of his life.

Brent passed away on October 13, 2021, at Sanford Medical Center surrounded by his family. Brent, your suffering is over. You fought the good fight, you finished the race, you kept the faith. Well done, good and faithful servant.

Forever loved, Brent will be deeply missed by his best friend and wife, Amy, and their three sweet children, Mya, Bryant, and Charly; his parents, Don and Sue De Kok; his brothers, Jon (Hilary) and Josh (Heidi); his in-laws, Earl and Julie Steidler, Wendy Steidler, and Rocky and Missy Thompson; his nieces and nephews (Dreyson, Elijah, Macie, Layla, Raelle and Zeke); his best friend and brother, Mike Rydell; and countless other relatives, friends and supporters.

He was preceded in death by his grandparents, Daniel and Irene De Kok, and Peter and Anna Koskamp.

A visitation is scheduled for Thursday, October 21, 2021, at Parkway Funeral Service, 2330 Tyler Pkwy, Bismarck. The public is welcome from 5 to 7 p.m. and there will be a prayer service and a time for sharing starting at 7 p.m. His Celebration of Life service will take place on Friday, October 22, 2021, at 11 a.m. at St. Mary’s Central High School on the Tony Wald Court.

A heartfelt thank you to the staff at Sanford Medical Center and the Bismarck Cancer Center for the steadfast care you provided to Brent, especially Dr. Peter Kurniali, Dr. Cole Kreofsky, Sam, Kayla, and Jill. Thank you also to the St. Mary’s family and community for the gracious support given to Brent over the past decade. Once a Saint, always a Saint!

To share memories of Brent and to get more information on livestreaming the services, go to www.parkwayfuneral.com.