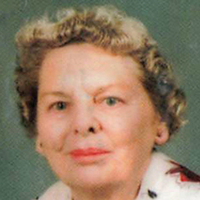 Hilda was born May 18, 1920, in Dunn County to Bernhard and Christina (Huber) Frank. She attended elementary school and later obtained her GED in Bismarck.

On September 17, 1941, Hilda married Fred Mohl. They were blessed with their daughter, Arlene. After farming north of Hazen, they moved to Pick City during dam construction and followed other construction work. Hilda clerked at elections and worked in the dietary departments at Minot and Bismarck hospitals.