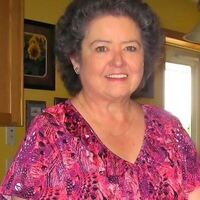 Audrey Lucille Teruko Kuykendall Benno passed away peacefully on Thursday, October 14, 2021 in her home surrounded by her family.

Audrey was born January 27th, 1947 in Honolulu, Hawaii to Matsuko Nakashima and Troy Junior Kuykendall. She was the first born to 4 more sisters and a brother. Being a military family, the Kuykendalls didn’t stay in one place very long. Audrey attended many schools from one year to the next until graduating from Sanger Union High School in 1964 in California. Audrey met and married her true love, July 29th of 1966, Clyde William (Bill) Benno. They were married at the Eastgate Baptist Church in Tulsa, Oklahoma. Bill joined the Air Force in 1967. Bill was sent to Vietnam and came back shortly thereafter. Their first son was born in 1970 at Merced County Castle Air Force Base in California. Audrey and Bill then moved back to North Dakota in 1975 and welcomed their second son.

Audrey was very active in the 80’s such as being on the Harrison II School district School board, a member of the Prairie Quilters Quilt Guild and a Boy Scouts of America Den Leader. She was also an honorary member of the Norseman Motorcycle club. Audrey worked at Minot Easter Seals, was Assistant Manager and head of Marketing for Town and Country Center. She also enjoyed working at Minot Convention and Visitors Bureau, Greater Minot Zoological Society, ND ACLD and many, many more. However her heart and soul went into the Harmony Center social center for the mentally ill. Audrey worked very hard to open this club in Minot in 1988 and was very proud of that center and what it did for its members…even making Thanksgiving dinner for her family AT the Harmony Center for all the members to enjoy. The center grew from 43 initial members to 150 in its first year. Audrey loved her work at the Harmony Center and was recognized for her efforts all the way up to Woman of the Year for the State of North Dakota in 1992. In the mid 90’s Audrey and Bill moved to Bismarck when Audrey took a job working for the State with Mental Health Advocates of North Dakota. She was now rubbing elbows with people who could really make a difference for the mentally ill in ND and she loved being part of educating ourselves and others about mental illness.

They moved back to Minot to be closer to family when the grandkids begin to arrive and after a couple of moves they bought some acreage near Burlington. Darin and his wife Amy were the first to build, then Bill and Audrey and Chris’ family later built a home next to them, finally, “Bennoville” was complete. Audrey was Teamlead with a division of ING in Minot for many years but most importantly she and Bill could start following their new loves, their grandkids in the many activities they were a part of. Audrey would happily sit in the crowd and cheer and occasionally yell at the referees about their bad calls and how the opposing team was being too hard on her grand kids, Alexis, Taylor and Brooklyn (Chris and Tammi’s kids) and Brynley and Cambrey (Darin and Amy’s kids). From basketball, softball, volleyball, soccer and more, Audrey and Bill were kept very busy watching their grandkids excel in sports.

During retirement Audrey kept busy working, but now doing things such as working at Hobby Lobby that she enjoyed immensely. Bill would often kid that when Audrey would shop after her shift ended she would end up owing more than she made at Hobby Lobby. Audrey also worked with M&S concessions so she could stay busy and make money for one of her greatest passions, card making. She would spend countless hours sitting in her craft room stamping, coloring and perfecting her skills. She also really enjoyed crafting with her grandkids. Her family all enjoyed fruits of her labor with boxes of cards for every reason and every season.

Audrey is preceded in death by her parents.