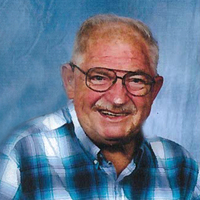 A livestream of the service will take place by accessing https://www.mtmsales.net/thomas

Ernie was born May 24, 1939, in Garrison, ND to Emil and Mathilda (Walter) Arlt.  He was raised and educated in Garrison.

Ernest enlisted into the North Dakota Army National Guard in 1957.  He served honorably during the Berlin Crisis and was discharged in 1964.

Ernest was united in marriage to Faye Mensing on June 28, 1960.  They made their home in Minot and were blessed with four children.  Ernie spent his working years as a dedicated mechanic between Johnson Chevrolet and Auran Chevrolet now known as Ryan Chevrolet.  He retired in 1999 after 36 years of service.

When he wasn’t restoring one of his antique cars or putting a shine on the Hudson that his grandfather bought new in ’47, Ernie enjoyed camping with his family and friends and traveling to many destinations in the United States and Canada.  He will be remembered for his love for his family, witty jokes and sense of humor, his smile, his kindness and his ability to diagnose a Chevy sight unseen.  Ernie would give the shirt off his back to help a stranger in need.  He was a family man who wanted nothing more than to work hard to provide for his family, which he did.