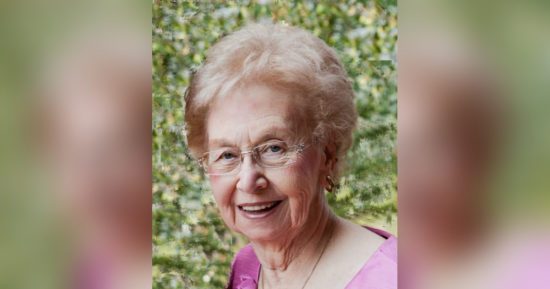 Betty Brunelle Taghon, 92, passed away Tuesday, October 12, 2021 at the Baptist Health Care Center, Bismarck, where she had resided since 2017.

A Mass of Christian Burial will be held at 11:00 AM on Tuesday, October 19, 2021 at Christ the King Catholic Church, Mandan, ND with Rev. Fred Harvey as celebrant. Burial will be at Mandan Union Cemetery.

Visitation will be held Monday, October 18, 2021 from 5:00-7:00 PM at Weigel Funeral Home, Mandan, with a Catholic Daughters Rosary at 6:30 PM and Parish Vigil at 7:00 PM. Visitation will continue at the church one hour prior to the service on Tuesday.

Betty was born on May 17, 1929, in a Bismarck Hospital. She was the first-born child to her parents David and Lillian (Paul) Ryberg. She was raised with her three siblings, Arlene, Beverly, and Virgil in Naughton Township in rural Burleigh County. She attended the Naughton Country School through eighth grade. In order to finish her education, she moved by herself to Bismarck and lived with her grandmother and later her sister in an apartment until graduating from Bismarck High School in 1947. After graduating, she worked for a short time at a bank in downtown Bismarck. At a friend’s wedding, she caught the eye of a handsome young man who she would describe often as the love of her life. She married Patrick Brunelle on a summer day in 1948 at St. Mary’s Catholic Church in Bismarck. They began their married life in Mandan and in 1949 were blessed with their first child, Kathy. Two more children, Bob and Marilyn, were born in the next five years and she settled into her most cherished job of motherhood. In 1959, the family was balanced perfectly with the birth of their fourth child, Jim. With all of her children in school, Betty was able to start working again as a salesclerk at the Mandan Rexall Drug while Pat owned and operated Pat’s Texaco on Main Street in Mandan. While working at the drugstore she specialized in selling cosmetics. She became known as the Revlon Lady as they often tested products on her beautiful complexion. A big surprise came when Pat and Betty found out that there was yet one more child meant to join their family. Nancy was born in 1967 while their oldest, Kathy, was starting college at NDSU. Their Catholic faith was deeply rooted, and she and Pat believed strongly that each of their children received a Catholic education. All five children attended Christ the King School.

In June 1980, Betty and her children faced the sudden and unexpected loss of Pat. With courage and determination, she guided her children through this difficult time. She gave strength and received strength from her faith and her family. Forced to become more independent, she earned a driver’s license shortly after Pat’s death. She changed jobs and began work at the USDA Experimental Station and later worked for Dr Little and Dr. Schmidt, now Vision Source. Life continued and her family grew with the addition of each much-loved grandchild. In July 1988, Betty married Bob Taghon. She moved to his home south of Mandan returning to her roots on the farm. They spent the next 17 years together traveling across the country and sharing their lives. Bob passed away in 2005. Faced once again with being a widow, Betty decided she was ready for her next life change. At the age of 76, she bought a lovely little twin home in Mandan where she lived happily until moving to Edgewood Vista in 2015.

Betty’s most-cherished moments were when she was with her family. Holiday planning started well ahead of time and always came off without a hitch. She enjoyed tending her flowers in the summer and building puzzles in the winter. Reading was also a favorite pastime. No one ever left her table hungry, and a few family favorites were her spaghetti sauce, potato salad, chocolate chip cookies, banana bread, homemade buns, and caramel rolls. You knew you were family when you savored the first bite of her family’s “secret” recipe coffee cake made just once a year at Christmas. Finally, a home was never quite a home without at least one kitty to warm your lap. A long line of kitties have shared the homes of Betty and her children through the years. With sadness, we let her go, but with joy we celebrate her life.

Betty’s family wishes to thank the staff at the Baptist Health Care Center for their loving care of their mom and grandma, Miss Betty. They respected her dignity until her last moments and for that they are so grateful. Donations in her name can be made to the Central Dakota Humane Society, Christ the King School, or the Alzheimer’s Association of Minnesota-North Dakota.