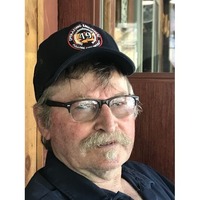 Our pop, Terry Lee Freadrich, passed away on October 4, 2021, at his and Ma’s beloved home, the concrete jungle. The good Lord must have needed a little laughter in the kingdom. Graveside services will be held 10 a.m. Monday Oct. 11 at the North Dakota Veterans Cemetery, Mandan.

Terry was born February 22, 1946, to Gerhardt and Leona Freadrich. He was raised and flourished on a farm southeast of Goodrich. A town of which has never fully recovered. It was here that pops dug his first basement to his father’s delight. It was a skill he would hone and profit from his whole life. There are not many blocks of Bismarck that haven’t been touch in some way by a Freadrich.

Pops joined the mighty Naval service and proudly served our country during the Vietnam Conflict, reenlisting several times. Bravery or insanity? I vote the first. In our eyes he certainly was the bravest, strongest, and toughest. This statement was only further backed by various characters who always had their money on “old Terry.”

Upon return from war pops met a cute little gal through his cherished sister, Phyllis (yep, town is still recovering from her, too). Hilda and Terry bonded in a lifelong commitment on July 10, 1972. Soon the additions of a baby girl, Christine Kay “Knucklehead,” and Todd Gerhardt “Flathead,” would complete this tight knit family who lived in a house full of fun and laughter.

Pops was not only an avid collector of Harley Davidson and Mopar, but he also bled, breathed and tracked them all over the house. So today he once again stands beside his wife, who we lost four years ago. Though the four years were tough, he was able to shine again and find his laugh after reconnecting with a high school treasure of a lady, Lois. And to you, Lois, thank you a million times over for bringing sparkle back to the old boy’s eyes.

This is just a sliver out of a wonderful man’s incredible life. He will be missed in a way too profound that there truly isn’t a way to express it.

Pops you really were the bravest, toughest and strongest…plus the most adored and most missed. I cry hard for one more minute but will hold on to the ones we had like mad.