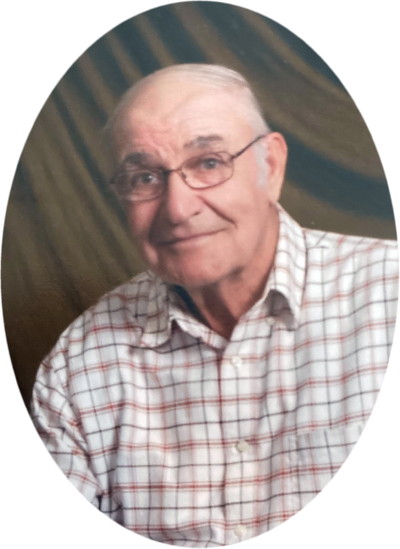 Albert E. Godlevsky, 86, Dickinson, died Wednesday, September 29, 2021 at St. Benedict’s Health Center, surrounded by his family. Albert’s Mass of Christian Burial will be at 10 a.m., Friday, October 15, 2021 at St. Wenceslaus Catholic Church with Fr. Robert Shea as celebrant. Interment will follow at St. Wenceslaus Cemetery, Dickinson. Visitation will be on Thursday, October 14, 2021 from 5 p.m. to 7 p.m. at Ladbury Funeral Service, Dickinson with a rosary and vigil at 7 p.m. with Deacon Bob Stockert presiding.

Albert Edwin Godlevsky was born on the farm December 6, 1934 in Dunn County, the son of Stanley and Anna (Roller) Godlevsky. He was the sibling of three brothers, Charles, Edmond and David and four sisters, Gertrude, Dorothy, Loretta, and Monica. Albert attended the Dunn County Iota #2 Country School through his elementary years. After receiving an eighth grade education, he worked for area farmers and ranchers and then dedicated himself to farming and ranching on his parents’ family farm. He was proud of being a young cowboy where he rodeoed in bareback and rode bulls. He met Leona Schmidt at a dance and they later married on June 3, 1958. They remained on the farm for the next 60 years and celebrated 63 years of marriage. Albert and Leona had seven children, Curt, Linda (Nov. 1960-Nov. 1960), Les, Jim, Scott (Sept.1963 -March 1964), Lori, and Brenda.

Albert was known for being extremely humble, kind, patient, hardworking, and a good provider for his family’s needs. Not only did he farm and ranch full time, he also worked full time at Husky Briquetting Plant/Royal Oak for 22 years. If he wasn’t working in the fields, tending to the cattle, or fixing things, he enjoyed riding horse, playing the accordion, listening to old time country and polka music, watching Westerns and Muhammad Ali box, attending church, having a sweet tooth, attending rodeos, helping his neighbors, playing cards (whist), and he often gave his visitors/company a shot of brandy with a smile when they walked through the door. He was also very proud of his children, grandchildren, great-grandchildren, and all their accomplishments.

Albert and Leona moved from the farm in 2018 to Hawks Point in Dickinson, then to Fort Collins, CO for his Alzheimer’s care, and then briefly to St. Benedicts Nursing Home in Dickinson. Albert wanted nothing more to return to the farm, which God led him to on September 29, 2021.