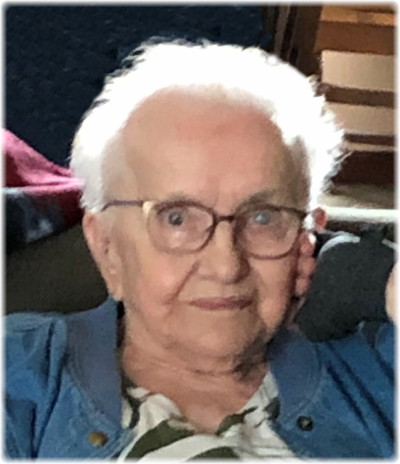 Tillie Filipi, 91, formerly of Dickinson, passed away on Saturday, October 2, 2021 at the Sheyenne Crossing, West Fargo. Tillie’s Mass of Christian Burial will be at 10 a.m., Saturday, October 9, 2021, at St. Wenceslaus Catholic Church, Dickinson, with Fr. Robert Shea as the celebrant. Visitation will be on Friday from 5 p.m. to 7 p.m. at Ladbury Funeral Service, Dickinson with a rosary and vigil at 7 p.m. with Deacon Bob Stockert presiding.

Tillie Jilek was born on June 20, 1930 to Steve and Anna Jilek. Tillie grew up on a farm north of Belfield. After the death of her father she moved into Dickinson with her mother and siters. She worked at places like the Cozy Lunch. On November 19, 1947 she married Ludwig Filipi. They built their life on a farm just north of Dickinson. They had six children, Jeanette, Richard, Joan, Gaylene, Geralyn and Pamela. She did a lot of work on the farm. The thing she hated most milking cows, but loved gardening, and always planted a big one to make sure their was surplus to give away.

Every mother has something that is especially remembered by family. Tillie was known for her caramel rolls. If any of her children were expected home she would have a fresh batch of caramel rolls waiting. She did this long as her hands allowed.

After her children grew up Tillie decided she did not want to sit in an empty nest, so she went to work at St. Ben’s nursing home. She worked there and later at St. Luke’s for almost twenty years as a nurses aid. After that she volunteered at the Food Pantry for many years.

Tillie was a devout Catholic and was a member of St. Wenceslaus Catholic Church. She moved to Fargo after the death of her husband to be closer to family, but never found any church she liked better. She had an early morning hour on the perpetual adoration schedule at St. Patrick’s for many years.

A special Thank You to all the staff at Sheyenne Crossing in West Fargo that cared for her during her last years.