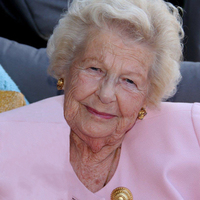 Ellen Kelsch went peacefully to rest Tuesday, September 21, just short of her 105th birthday. She was born to Benjamin and Catherine Tillotson on November 2, 1916 in Bismarck, North Dakota.

Ellen graduated from Bismarck High in 1934.  She went to work at age 17 at the Bank of North Dakota.  She continued her education at North Dakota State University.  During her lifetime she also worked for the Commissioner of North Dakota Education and the Speaker of the House of the North Dakota Legislature.

She belonged to P.E.O., Mother’s Club, Breakfast Club and St. George’s Episcopal Church Guild.  She loved bridge and was an avid reader.  She enjoyed a cocktail, a well-set table, and a good meal with lots of color and fresh flowers.  Ellen was also active in politics.  As a precinct committee woman, she got out 95% of registered voters.

Burial will be held at a later date.

The Life of Ellen Kelsch

Ellen was born to Benjamin and Catherine Tillotson on November 2, 1916 in Bismarck, North Dakota. She is the oldest of five children—Bill, Alice. Ann and Ben followed in quick succession. Only her sister, Alice, is still living. Life was not always easy—people in North Dakota not only had the depression to deal with but, also, the drought. My uncle Bill said that even the trees on the Missouri River were dead. Mom’s dad was a lawyer— legal services were probably not in big demand during that time. Mom talks about having to eat squash three times a day—maybe that was her version of “when I was your age, I had to walk up hill to school both ways.” I’m not sure.

Mom graduated from Bismarck High School in 1934. She went to work at age 17 at the Bank of North Dakota. She continued her education at North Dakota State University in Fargo and worked at the bank in the summers. Then it was her brother Bill’s turn to go to college so she worked at the bank full time for two years. She was able to save enough money to buy her own sterling silver flatware –Versailles.

She married Frank Nichols in 1939. They first lived in Morehead, MN until she got a job at Herbst Dept. store—they had to move to Fargo because she couldn’t walk to the store from Morehead. Mom earned $15 a week. I was born while they lived in Fargo. When Frank got a job in Bismarck, they moved there.

During the war, Frank went to Akron to get a defense job that was offering higher wages. Until Frank could find an apartment, she worked at Ft. Lincoln, south of Bismarck, which was then a US Detention Camp for German and Japanese citizens. My grandmother took care of me while Mom was at work. That meant Mom had to push me in a stroller/baby carriage several blocks often through snow before work. Finally a gentleman from the camp offered to give her and another woman rides to work so she sold what they had in their apartment and moved in with my grandmother until Frank found an apartment in Akron and we moved there.

When that marriage ended, Mom and I, age 4, returned to Bismarck and moved back in to my grandparents’ home. Grandma had moved into a smaller home during the war as everyone—including my grandfather were working out of state or serving in the military. Then, after the war, everybody came back. So, Mom and I lived with my grandparents, my two uncles and my two aunts in a two bedroom, one bath house! And people wonder why I am so spoiled!

Mom found worked at the capitol building as a secretary to the Commissioner of the Board of High Education. Ellen married Duane Davis in 1948. Duane had a daughter from his previous marriage so I acquired a sister—Claudia. A year later, Jay (otherwise known as Boathouse – cuz that’s where he was conceived) [sorry, Mom] was born. Jay Boy was the apple of everyone’s eye—especially since he was the only Davis male grandchild. We were joined in the summers and other times by our sister, Claudia. So Mom went from having one child to having three. She was a great Mom but she could be sneaky—she’d put Jay’s uneaten vegetables he hid under his plate under his pillow. And, when I was in high school and coming in past curfew, I’d tip toe to my room thinking ‘Whew, I made it” and close the door to my room, turn on the light—and there she’d be! In my bed! Also, I remember when time as a teenager arguing with her and said said, “That’s the most wonderful thing about being sixteen—never again are you so smart!”

Originally the house that we lived in was on the edge of town and had 37 acres. Gradually, the property was reduced in size but we still had horses while I was in high school. One of our horses could crawl out under the fence even if she was hobbled fore and hind legs—we caught her eating the flowers on the governors’ mansion lawn. My horse was arrested for loitering around 1st Federal Savings and Loan. After daddy died, Mom sold most of the remaining property and now has two acres—considered to be in the inner city.

Mom was always busy —she belonged to Mother’s Club, PEO, church guild, etc. She played lots of bridge. The most infamous group she belonged to was Breakfast Club—a group of six women who met every Monday morning. All Jay and I had to do to threaten someone was to say, “I’ll tell breakfast club!”

Mom was always active in politics, too. As a precinct committee woman, she got out 95% of the vote! Of course, she didn’t know exactly who they voted for. Duane’s cousin, John Davis, was a North Dakota Governor and later served as Secretary of Civil Defense.

Duane died in 1966. After his death, Mom worked as secretary to the Speaker of the House in the North Dakota Legislature. Then, one day George Kelsch, a North Dakota native, came to visit his family and looking for a “nice North Dakota widow.” He found Mom! After a short courtship, they were married in 1968. I remember Mom saying, “After all, at my age, you can’t have a long courtship!”

Growing up as the oldest of five kids, Mom complained that she wasn’t going to have five children. Well, George had two, George Jr. and Sharon, and Mom had three which equals five. Many holiday celebrations were a combination of families.

Part of the deal when she and George were married is that they would split their time between Bismarck and California. Originally, they lived in Orange in the winters. They moved to Marrakesh in 1978. Mom was very active with the putters and has a whole boatload of birdies to prove it!

George and Mom took lots of wonderful trips—sometimes with John and Katherine Kelsch (George’s brother and sister-in-law) and sometimes with George Jr. and his wife, Liz.

Family from all three husbands are here today plus grandchildren and great grandchildren. Starting with husband number one—three of my cousins are here—Betsy and her husband, Mark; Bob and his wife, Diane, and Bill and his wife, Janet. And, of course, me and my husband, Dick. Our sons Todd and BJ with his wife, Lynne, and two sons, Josh and Sean.

Husband no. 2–our sister, Claudia and her daughter, Tracy and granddaughter Tierney are here. Jay and his wife, Elly, his son, Jeff (otherwise known as JJ) and his wife, Becky, and kids—Brady, Kelton and Kenady, and Jay’s daughter, Merritt, are here.

And last but certainly not least, is husband No. 3. Liz Kelsch—George’s daughter-in-law, and her kids—Matt and Andrea are here. Jim Kelsch, George’s nephew, is here. Sadly, Sharon, George’s daughter was not able to be here today. However, she is here in spirit—she gave the beautiful flowers on the tables.