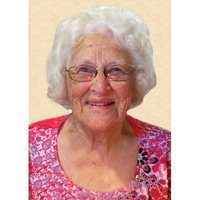 Donna Marie McMahon, 95, Bismarck, passed away Sept. 28, 2021 at St. Alexius, Bismarck. Mass of Christian burial will be held 10 a.m. Saturday, Oct. 2 at Church of Corpus Christi, 1919 N Second St., Bismarck. Visitation will be held one hour prior to the service at the church, along with the Rosary recitation starting at 9 a.m.

Donna was born to Carl and Margaret (Boucher) Carlson on July 29, 1926, in Des Lacs. She was raised and educated in Des Lacs, graduating from Minot Model School in 1944.  She then attended Minot State College until being called to teach at Greenbush Country Grade School near Donnybrook, due to a teachers shortage. She was then employed at Montgomery Department Store primarily as a bookkeeper in 1945.

On November 18, 1946, which was also her mother’s birthday, she married Douglas F. McMahon, in Berthold. Following their marriage, they made their home in Minot. She continued to work at Montgomery Ward Dept. Store until she and Douglas welcomed their first of six children, and she was able to stay home and care for them. Since then, she was primarily a volunteer worker for various organizations, including the John Moses Air Force Hospital in Minot.

She was a member of Little Flower Catholic Church, Minot, the American Legion Auxiliary, Confraternity of Christian Mothers, where she also served as a president.

Following Doug’s retirement, the two headed to Mesa, Arizona, where they spent their winters. Donna enjoyed traveling, reading and baking.