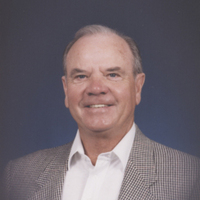 A livestream of the service is available by accessing https://www.mtmsales.net/thomas

Melvin was born August 1, 1928, in Minot, ND to Ray and Martha (Tannehill) Hoover. He was raised and educated in Minot, graduating with the Minot High School Class of 1947.

Mel entered active duty with the US Navy on January 11, 1946, completing the application process to serve his country while he was in high school. He served honorably and was discharged on November 13, 1947.

Mel earned a degree in Business Management and Accounting at Minot State University in 1950.

Mel was united in marriage to Yvonne Falstad on July 28, 1950, at Bethlehem Lutheran Church in Garrison. This union would be blessed with 71 years of love, dedication to one another and seven children. They lived in Garrison for a year until moving to the Magic City in 1954.  Yvonne went to her heavenly home with Jesus on February 19, 2020.

Mel worked in the auto sales industry his entire professional career. He started at Westlie Motor Company working his way to manager of the office and sales department. During his tenure with Westlie’s, Mel earned many awards for sales and was recognized as one of Ford’s Top 30 general sales managers in the US.

Mel became partner in Blesener Oldsmobile & Nissan in 1979 and received many managements and sales awards from Oldsmobile and Nissan as well. Mel retired in 1992.

Mel was a member of St. Paul’s Lutheran Church, Minot and was one the founding members with the Good Shepherd Lutheran School. He served as President of the Minot Motor Association and served as a board member of the ND Auto Dealer’s Association.

Mel was an avid golfer and a member of the Minot Country Club and won the Club Championship in 1979.  Mel loved spending time in Arizona working on his golf game with his family and friends.  In later years, he enjoyed competitive games of gin with his family.

Mel was preceded in death by his wife Yvonne and son Steven.