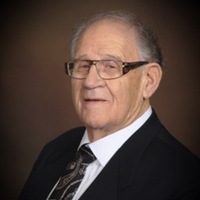 To watch the live stream of the service, visit https://cathedralparish.com/

It is with deep sorrow and much love that we mourn the passing of John M. Helfrich, 87, Spearfish, South Dakota, formerly of Bismarck. John passed away peacefully, September 3, 2021, at Monument Health Spearfish Hospital.

John was born October 16, 1933, on the farm, south of Glen Ullin. He was the second youngest of eleven children born to John and Katherine (Meuchel) Helfrich. He received his education, grades one through eight, in a one-room schoolhouse. He graduated from Glen Ullin High School in 1951. Farming was his goal, but Uncle Sam had different plans. He was drafted into the US Army during the Korean Conflict and served at the 121st Evacuation Hospital in Pusan, Korea. Having fulfilled his obligation, he returned to the home place to farm.

John was never afraid of hard work. He farmed until 1981 and had started trucking on a small scale. J-Mar Enterprises grew to be a very successful, over the road trucking company. He also owned The Diggers, an excavation company and was co-owner of America’s Home Loans. A successful businessman and entrepreneur, he was always looking for opportunities and planning for the future. He said, “Don’t ever give up, no matter what obstacles you encounter. No one can take away your will to succeed, except yourself.”

A 6’5” tall farm boy at heart, John loved the outdoors; big game hunting, camping, zooming across the water in a speed boat, up a mountain on a snowmobile or all around the country, including Alaska, in a motor home. He was a big man with a big, generous heart. He genuinely enjoyed people and had friends wherever he went. He had a slew of witty one-liners, and little ditties he sang, mostly in tune. With a quick smile and a deep, hearty laugh, he’d make you laugh too.

John adored children; Uncle John always had time for his nieces and nephews growing up. He considered himself lucky to eventually inherit four children of his own. March 4, 1978, he married Marlene (Roemmich) Miller and had an instant family; two daughters, Jackie Miller and Janel Helfrich. Sadly, she predeceased him on July 10, 1993. John was then married to Diane (Stein) Bothun on June 10, 1995, and his family grew again to include son Charles Bothun and daughter Angie Voegele.

John is survived by his wife Diane Helfrich, his only remaining sibling, Alice Kobilansky of Bismarck, his children, Jackie Miller of New York, Janel (Brenda Krogstad) Helfrich of Minnesota, Charles (Wyndee) Bothun of Arizona and Angie (Scott) Voegele of Bismarck, grandchildren Noreene and Kasey of Arizona, Krista and Adam of Bismarck, great grandchildren,  Caleb, Akasha, Bayleigh, Austin, Hayden and Mason of Arizona and Jaxon of Bismarck, many nieces, nephews, cousins, in-laws and dear friends. John is predeceased by his parents, first wife, nine siblings, son-in-law, a granddaughter and great-grandson.

The family would like to thank the staff of Monument Health Spearfish Hospital and Edgewood Vista in Spearfish, for their care and compassion.

Relatives and friends are invited to attend a Mass of Christian burial 11 a.m. Sept. 30 at Cathedral of the Holy Spirit, 519 Raymond Street, Bismarck. The service will be live streamed on the church’s website. Following the service, a Celebration of John’s Life and time of fellowship will be held at at Lady J’s, 930 N. Griffin Street, Bismarck, ND.

In lieu of flowers, please consider donations in John’s name to local charities dedicated to children and families.