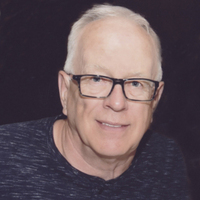 To view a livestream of the funeral service access: www.firstlutheran.tv

On September 20, 2021 Milton “Milt” Allen Haugen, loving husband, father and grandfather passed away peacefully surrounded by his family at age 70.

Milt was born on October 20, 1950 to Martha and Arthur Haugen in Williston, ND and was raised on the family farm near Alamo, ND. Milt married Loraine Zemliska July 30, 1976 in Williston and their 45 year adventure began. In January of 1980 they welcomed their son Lucas and they lived in Williston until they moved to Minot in 1991.

Milt was number 9 of the 10 brothers and sisters and worked on the family farm until he graduated from High School. At 18 he moved to Williston and began working for Farmers Union. He retired from Winfield Solutions after 36 years of service.

Although Milt lost his 6 month battle with cancer he won in life. Milt saw many parts of the world a humble farm kid from Alamo could only dream of. Milt and his wife spent time traveling abroad throughout Europe and the UK, several spring seasons in Alabama, long weekends in Canada and frequent trips taking the grand kids to Medora.

Milt was preceded in death by his father Arthur, mother Martha, brothers Gary and Lowell, sisters Phyllis Larson and Jan Whritenour. He is survived by his wife Loraine, son Lucas and his wife Sherri, and his grandchildren Isabella Grace, Carter Milton and Vincent Allen, brothers Mervin, Ronnie and Greg and sisters Shirley Gardner and Beverly (Walter) Brown and many nieces and nephews.

There will be a book signing at Thomas Family Funeral Home on Thursday September 23rd from 3:00 PM to 5:00 PM followed by a private family service. Milton’s funeral will be held at First Lutheran Church, Minot on Saturday, September 25th at 11:00 AM followed by burial at Rosehill Memorial Park, Minot, all are invited to attend. To view a livestream of the funeral service access: www.firstlutheran.tv

The family would ask that you remember Milt by making a donation to the First Lutheran Church Building Fund or a charity of the donor’s choice.