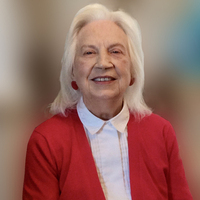 Marjorie Allen was born in 1932 to Arnold and Alice Thorpe of Antler, ND. Her family lived on a nearby farm during her earliest years but later moved into the town itself. Her father purchased the prominent building at the center of the town square where they made their home. Marjorie attended school in Antler and graduated with three other girls in her class.

Marjorie faced many challenges as a young girl, including a life-threatening bout with rheumatic fever, through all of which she became a woman of noteworthy resilience. But there were happy times too. Marjorie enjoyed lasting friendships, worked for a while at the Antler hotel’s ice cream shop, and delighted in occasional town dances with live music provided by traveling orchestras.

One very important experience for her was attending a local Bible camp where she met Jesus. Though her faith was not much affirmed in those early days, it was genuine and set Marjorie on a path filled with blessings.

While still in high school, Marjorie met Warren Allen, her future husband, who served for a short time as superintendent of the Antler school system. They were married in a country church near Antler on a very hot August afternoon. Their marriage would thrive until Warren’s death at the age of 96, over six decades later.

For a country girl from a remote prairie town, Marjorie achieved remarkable things. She not only graduated from college but later, as a mother of two teenaged kids, earned her graduate degree in English from Sacramento State University. Her graduate thesis was on Beatrix Potter, the English writer and illustrator who was best known for her children’s books featuring animals, such as The Tale of Peter Rabbit. Marjorie herself taught children’s literature at Minot State University for many years. She was also a meticulous writing instructor, laboring long hours over student essays as she worked to teach her young charges how to articulate their thoughts with precision and clarity.

Throughout her married life, Marjorie faithfully loved and served her husband and children. After the Mouse River flood of 2011 when they lost their home just outside of Minot, she and Warren moved to his family’s homestead in Deering. She became an integral part of that community, trekking six days a week (at her husband’s insistence) to the town’s cafe for lunch with the locals whom they so appreciated. The townsfolk appreciated them back and included Marjorie among the honored citizens.

After her husband died in 2017, Marjorie moved to Oregon to be near her two children and their families. She was able to return to Deering for a few weeks over a couple of summers before her health made the trip too difficult. Even so, she never forgot (or let her kids forget) that Deering was her home and always where she wanted most to be.

Marjorie will be laid to rest next to her husband at a little cemetery just outside of Deering. For her family who survive her, this little patch of land on the vast northern plains will always be sacred ground until the day the earth is made new and we shall see each other again face to face.

Public Graveside service:  October 18, 2021 at 1:00 p.m. in Bethel Cemetery, Deering ND.
Visitation:  At the family’s request there will not be a viewing, however friends may sign a memorial register book on October 17th from 3:00 – 5:00 p.m. in Thomas Family Funeral Home, Minot.
Memorials:  preferred to Bethel Cemetery of Deering.