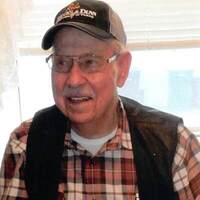 John Raymond “Ray” Johnson, 91, passed away Sept. 10, 2021. A memorial service will be held 11 a.m. Monday, Sept. 27 at Parkway Funeral Service, 2330 Tyler Pkwy, Bismarck. Visitation will be held one hour prior to the service. A service livestream will be available on the funeral home’s website.

Ray was born on August 8, 1930, in Makoti. He was the youngest of eight children born to Bert and Christina (Johnson) Johnson. He was raised and educated on the family farm near Ryder, which is still in the family. He enlisted in the Army in January 1949 and served in the Western Pacific Theatre, earning the Good Conduct Medal and Pacific Theatre Ribbon. He returned to the states in September 1951 and was discharged in September 1952.

After returning from the service, he moved to Seattle, Washington. He married the love of his life, Rita Mehlhoff, on September 23, 1953, in Reno, Nevada. In Seattle, Ray went into the auto business where he started in the service department and later moved into the parts department. He became the assistant used car manager and was later promoted to the manager. They also got into the RV business and eventually bought a GMC franchise. He sold out his ownership in 1971 and went to work for another dealership in Seattle in the leasing department. He retired in 1980.

After Ray’s retirement, he and Rita moved to Hamilton, Montana. They traveled for about two and a half years, living in an RV. In 1989 they moved to Woodburn, Oregon, and returned to Bismarck in 1994.

He enjoyed playing golf, pool, cross country skiing and playing cards. Ray was a member of the Eagles Club, Elks Club and the VFW.

Memorials may be made to the North Dakota Veterans Cemetery, Mandan.