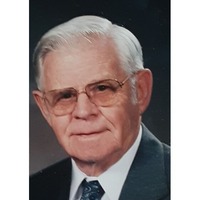 He was born on August 3, 1925, in Bismarck, to Bill and Clara Wanttaja and grew up on the family farm near Wing.  Using horse-drawn plows in his early years, he displayed a knack with mechanical devices, including various cars that he had to keep running. Over his lifetime, he had owned over 70 cars of all types and models.

In addition to working on the family farm, and graduating from Wing High School, he also took training to work as a telegrapher with the railroad.  Later he studied Mechanics at the North Dakota State School of Science in Wahpeton.

He married Grace Amundson of Regan in 1950 and had two sons – Keith and Ron.  In 1952 he moved the family to Riverdale where he worked on the construction of the Garrison Dam.  In 1956, they moved to Fargo, where Willys began his career with General Diesel and Equipment Company. He started in the parts department, later was promoted to Parts Manager, and eventually after 23 years in Fargo was transferred back to the Bismarck area as General Manager of the new branch office in Bismarck. Willys and Grace enjoyed living near their relatives and old friends again in Burleigh County and were members of the Eagles, Moose, and Elks clubs in Bismarck.

Best of all, Willys could start to enjoy one of his passions – cars – and especially old cars.  He added a second garage to their Bismarck home and a series of antique cars passed through his hands.  He was a long-time member of the Pioneer Auto Club and some of his cars included a Model T, Model A, a 1932 Chevy and cars from the 50’s.

After his retirement, Willys and Grace bought a motor home and enjoyed camping with their friends, as well as attending many car shows, parades, rodeos, while spending winters in Arizona.  In 2011 they moved to Prior Lake, Minnesota, to be closer to family.  After Grace passed away in 2017, Willys remained active and healthy for several more years until his health started to decline.

In addition to his wife, Grace, he was preceded in death by his parents, Bill and Clara; his brother, Kenneth; sister, Bernice (Wayne) Hickel; brother-in-law, Leo (Gen) Amundson; sister-in-law, Norma Amundson; and great-granddaughter, Britta Halvorson.