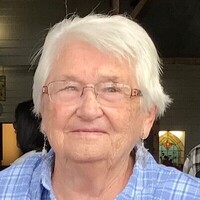 Lorraine Weippert, 87, Steele, formerly of Tappen, went to be with her heavenly Father on Aug. 6, 2021. A memorial service will be held 11 a.m. Wednesday, Aug. 18 at Parkway Funeral Service, 2330 Tyler Pkwy, Bismarck.

Lorraine was born on March 1, 1934, near Regan, to Christ and Lena (Stubert) Hausauer.  She worked at Johnnie’s Café in Washburn where she met the love of her life, Eugene Weippert.  They were united in marriage on October 6, 1956 in Tuttle.  After their marriage, they lived for a short time in Woodworth before moving to Minot, where she worked at the Red Owl Grocery Store.

Lorraine supported her husband’s passion for farming which led them to purchase a farm south of Tappen in Valley township. She could be found working alongside Eugene when she wasn’t out waitressing, cleaning or painting.  In 1993, they decided it was time to “retire” and built a new home in Steele.  After moving to Steele, Lorraine soon began working at Arnold’s Hardware and worked there until its closing.  She then worked as a Senior Companion with Lutheran Social Services for sixteen years and could often be found taking “her ladies” on trips to the grocery store or out to the lake to eat.  She was also the Valley Township Assessor for many years.

Lorraine quilted, crocheted, refinished furniture, baked, and spent time gardening in her spare time. She also enjoyed playing a competitive game of pinochle and Phase 10, especially with her grandchildren. Lorraine was proud to have become a great-grandmother last year. She would light-up every time her great-grandson, Beckett, came to visit and she spoke of him often. He was definitely the apple of her eye.

She was preceded in death by her husband; daughter, Brenda; her parents; sister, Ruby Ziegler; and brothers, Reuben and Melvin Hausauer.