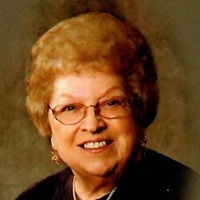 Allegra B. “Lee” Haugen, 96, Garrison, was born into her internal life on Wednesday, March 17, 2021 at the Garrison Hospital.  Private memorial services will be held to celebrate the honor and glory of God and in cherished memory of the life He granted to Lee.  Burial will be held at the North Dakota Veterans Cemetery.

Visitation will be held on Friday, March 26, from 1 to 5 at St. Paul Lutheran Church in Garrison.

Allegra Beatrice “Lee” Haugen was born February 27, 1925 to Paul and Hilda (Reiman) Bluhm at their rural farm home.  At a young age she moved with her parents to rural Ryder. She graduated from Ryder High School in 1942 and continued her education in California.  She met the love of her life, Gustav Adolph Haugen on July 3,, 1947, and they were married on September 7, 1947.  He passed away on June 13, 1993, after 44 years of marriage.

She worked as an accountant for a financial institution in San Diego, CA for 25 years.  She and her husband moved to Garrison in 1980 to be near her parents.  She moved to an independent living facility in Douglas, WY in October of 2014 but returned to North Dakota in March of 2020.

Lee was a member of St. Paul Lutheran Church in Garrison, the American Legion Auxiliary, Garrison Heritage Park, SACA and served a s aboard member and volunteer at the Sakakawea Gift Gallery from the time it opened until it closed-17 years.

One of Lee’s greatest satisfactions in life was the fact that she was granted the friendship of so many wonderful people.  That was something she cherished and she returned it with the honesty that was so much a part of her life.  A hard, loyal worker, she gave of herself to be of service to others.  Strong and independent she never had difficulty knowing the direction her life would take.  She never changed her philosophy which was based on the Christian principles of her faith.  Our family appreciates all of the kindnesses you have accorded to us in her memory.  We shall never forget the love you gave to her and the sensitivity you accorded to us.  Thank you!