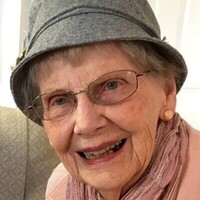 Doris was born June 7, 1925, in Bismarck, the daughter of Arthur and Mabel (Skoglund) Solberg.  She was raised on her grandfather Johaan August Solberg’s homestead, in Naughton Township.  She attended Naughton #1 rural school, traveling to and from school on her horse Roxy.

Doris moved to Bismarck to attend junior high and high school.  She graduated from Bismarck High School in 1943.  After graduation, she worked at Dakota National Bank.  She then worked as receptionist for Governors John Moses and Fred Aandahl.  In the meantime, she started a courtship with Edwin Landerholm, also from Naughton Township, which was interrupted by WW II.  During the war, Doris served her country as a member of the Gray Ladies.

Doris married Edwin on June 28, 1947, in Bismarck.  The couple lived in a series of apartments, until moving into a new house on the 1300 block of N. 11th Street, in 1952.  Doris was a mainstay of over six decades of what was a very special neighborhood.  She developed life-long friends throughout her time on 11th Street.

In 1967, Doris began work at Roosevelt Elementary School, first in the cafeteria, and soon as the school secretary.  She loved her job, and was loved back by each new class of students.  Aside from secretarial duties, she treated endless scraped knees and bruised egos, as an unofficial nurse, counsellor and confidant.

Doris retired in 1989, and she and Edwin had more time to travel, eventually visiting most of the states and Canada, Europe, Australia, and Central America, but mostly attending graduations, weddings, and other life events of grandchildren, great-grandchildren, and numerous nieces and nephews.

Doris was an active member of McCabe United Methodist Church, including Circle, Sojourners, and United Methodist Women, and prepared and served countless dinners for church events.  She was active in Belles and Beaus Square Dance Club, Three Crowns Swedish Club, Sons of Norway, and various swim and exercise clubs.

In 2016, Doris moved from her beloved 11th Street to Primrose Retirement Community, where she quickly found a new home.  She delighted in developing friendships with the staff and fellow residents, and her family wishes to express their deep appreciation to Primrose and extended family, friends and medical staff that brought so much quality to her life and care.

Doris is survived by her daughter and son-in-law, Kerry and Dale Hoffmann, of Sheridan, Wyoming; her son and daughter-in-law Kurt and Nancy Landerholm, of Mentor, Ohio; her son and daughter-in-law Kent and Patricia Landerholm, of Apple Valley, Minnesota; her grandchildren, their spouses and great-grandchildren, Sonya and Tom Hensley, Eric and Margit Hoffmann (Miriam, Rebecca, Benjamin), Todd and Ashley Hoffmann, Megan and Bob Woodward (Sarabelle, Sullivan, Lucy and Knox), Mark and Eszti Landerholm (Samuel, Nathan, and Jakob), Scott and Savanah Landerholm (Ivy and Selah), and Michael and Christi Landerholm (Elijah); her sister Arla Seyforth of Chippewa Falls, WI, and sister-in-law Beverly Solberg, along with numerous nieces and nephews.

She was preceded in death by her husband; her brothers, Clifford and Bernard; her sister, Lois; and great-granddaughter Zoe.

Memorials are preferred to McCabe United Methodist Church or Friends of the Railroad Bridge.