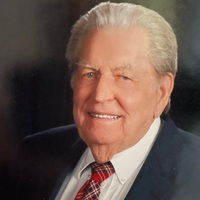 Doran was born on May 31, 1929 the sixth child of George and Minnie (Strom) Miller, on his parents’ homestead in McKinley Township of Ward County, near Minot, ND. He graduated from Minot High School in 1947. In 1948, after the death of his father, Doran stepped in and began operating the family farm.

Doran married Constance Ellen Brooks on December 24, 1956 in Las Vegas, Nevada. They made their home on the Miller family farm where they raised small grains and parented five children: Faye, Kim, Sue, David and Janet. Doran and Connie began spending the winter months in Mesa, Arizona in 1987. After nearly 53 years of marriage, Connie died on June 10, 2009 in Arizona. Most recently, Doran has resided in assisted living facilities.

Interment will be in the Immanuel Lutheran Cemetery – rural Minot after the lunch.