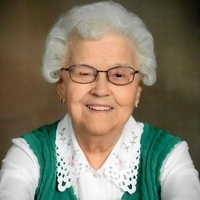 Eva R. Kokkeler, 96, of Bismarck (formerly of Garrison) died Monday, March 22, 2021 at Edgewood Assisted Living on Dominion Facility in Bismarck where she had resided since January of 2019.

Eva was born on July 9, 1924, the oldest daughter of Philip and Clementine (Weber) Ferderer.  She was raised on the family farm and graduated from New Salem High School in 1944.

Eva was united in marriage to Raymond T. Kokkeler on October 1, 1946 in the St. Pius Catholic Church in New Salem, ND.  They lived in New Salem until 1950 when they moved to Garrison so Ray could work on the construction of the Garrison Dam.  Ray and Eva loved to dance and could be found many a Saturday night dancing the night away with their large group of friends. During her lifetime Eva worked at the Benedictine Living Center in the laundry until she retired.

Eva was a member of St. Nicholas Catholic Church and St. Ann’s Altar Society until her death.