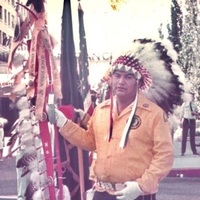 Terrance “Terry” Stevenson, 68, Bismarck, formerly of New Town, died on Monday, April 19, 2021 at a Fargo hospital.  Funeral mass will be held on Friday at 10:00 am at St. Anthony’s Catholic Church in New Town.  Procession from Thompson Funeral Home to St. Anthony’s Catholic Church will leave at 4:00 pm on Thursday with a vigil to be held from 7 to 9 pm at the church.

Terry Stevenson, Eagle in the Sky, of the Hidatsa tribe, age 68 was born March 18th, 1953 in Stanley ND to Wilbur and Etheline (Hogan) Stevenson. Terry was a member of the Water Buster clan.  He grew up in Shell Creek on the Fort Berthold Reservation with his extended family of cousins, aunts, uncles, and grandparents.  He had a special place in his heart for his grandfather, Rufus Stevenson

Terry enlisted in the United States Army and served from November 30th, 1971 to July 12th, 1973 with the 28th Infantry, 1st Infantry Division.  Terry served in Vietnam and IndoChina with the 1st Infantry Division. During this time in service he was awarded the National Defense Service Medal, Vietnam Service Medal, Army Commendation Medal, Vietnam Campaign Medal with 60 Device, and the Combat Infantry Badge. Terry transferred to the US Reserve until November 29th, 1977.

Terry and Marti were married for 39 years. They were blessed with four children, Wilbur, Sean, Mick, and Adrienne. When Marti and Terry first married they moved to White Shield, ND where he was welcomed by the community like one of their own. Terry didn’t worry too much about things and took things in stride. Terry worked hard to give his children what they wanted, never saying no.

Wherever he worked he always stressed safety on the job. He worked for MHA Cartography, the State of Colorado Highway Department, and the Dakota Gasification Plant for 22 years until a work related injury forced his retirement.  He decided to complete his Business Management Degree at Bismarck State College, graduating in 2007.

At one time he was a member of Post 300 until it dissolved. Terry is currently a member of the YoungHawk/Bear Post #253

His medical conditions worsened to the point of required constant care. Marti and his children cared for him for 14 years. Terry fought his battle for the love of his family and grandchildren. Eventually he was transferred to Bethany Retirement Home in Fargo, ND.

Terry was a dedicated hockey dad.  Terry was involved in teaching, encouraging, and driving the hockey spirit to Wilbur, Sean, and Mick.  Terry enjoyed music and going to concerts. Terry loved The Rolling Stones, George Thorogood, AC/DC, and Aerosmith.  He enjoyed hunting, fishing, bingo, going to the casino, pow wows, and camping.