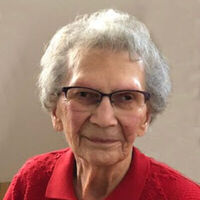 Helen Hellem passed away at the Garrison Hospital on January 22, 2021 with her daughters at her side.   She was born Helena Esther Delzer on November 2, 1930 at the family farm near Benedict, ND to Wilhelm and Emilia (Wohlgemuth) Delzer.  She attended elementary school at School Number 3 in Snake Creek District 68 (a one room rural school).

After Helen’s Father passed, she and her Mother moved to Garrison. She attended school in Garrison and graduated from Garrison High School in 1948. While she was going to high school, Helen worked at Sayler’s Five and Dime, often arriving early in the morning to work before school started.  After high school she worked at McLean Electric Cooperative and that is where she met the love of her life, Kenneth Fitzsimonds.

Helen and Ken were married on June 26, 1955 at the Congregational Church in Garrison.  They were blessed with 2 daughters, Pamela and Valerie.  After being a stay-at-home Mom for seven years, Helen began a career as a self-taught medical transcriptionist at the Garrison Memorial Hospital where she worked for over 25 years.

The Garrison community and their church were especially important to both Helen and Ken.  Helen taught Sunday school for many years and was a member of the Naomi Circle.  They spent their vacations traveling throughout the US and Canada or camping on Lake Sakakawea with their daughters and friends.  Helen and Ken always supported their daughters in their extra-curricular activities and one highlight was chaperoning the Garrison High School Band on a bus trip to perform in the Calgary Stampede Parade.

Tragedy struck in May 1981 when Ken was injured in a plane crash while on a Civil Air Patrol rescue mission. He unfortunately passed away in June of 1981 due to his injuries.

Helen married LeVerne Hellem in July of 1983 and they spent their retirement years between Garrison and Arizona.  Vern passed away in November 2008.

Helen enjoyed dancing, reading and flower gardening.  She was pleasantly surprised to win Best of Show when her neighborhood girlfriends cut her roses while she was at work and entered them in the local flower show.  She knitted and crocheted many hats, mittens and afghans for her children and grandchildren in their favorite colors.  She was a perfectionist when it came to her cooking and baking, always eager to try new recipes. At the request of her granddaughter, Brandi, Helen baked hundreds of her famous sugar cookies for the wedding reception.

Some would describe Helen as a “stubborn German”, but she had a kind heart, loved to laugh and never forgot her family’s and friend’s birthdays and anniversaries.

Helen’s family would like to thank the staff at Garrison Hospital for their tender and loving care. In lieu of flowers, memorials can be made in Helen’s name to Camp of the Cross Ministries (1228A 47th Ave. NW, Garrison, ND 58540) or Garrison First Congregational UCC. (P.O. Box 186, Garrison, ND 58540)

Garrison Thompson Funeral Home is in charge of arrangements and a celebration of life will be planned at a later date.