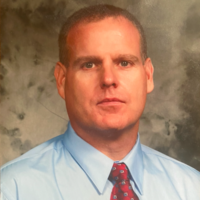 Kelly Rasch, 60, passed away on Wednesday, May 5, 2021, at his home in Garrison, ND. Those who wish to celebrate Kelly’s life are invited to both a visitation (Tues. May 11, 4-8 pm) and funeral service (Wed. 2 pm), which will be held at St. Paul Lutheran Church in Garrison, ND.

Kelly was born on Valentine’s Day 1961 to Duane and Ellie Schumaier Rasch. He grew up in Garrison, ND, excelled at football, wrestling, track, and weightlifting. He was Homecoming King, achieved the rank of Eagle Scout, and was selected to play in the Shrine football game. He attended Dickinson State on a full-ride football scholarship.

Moving to Trenton, ND after graduation, he taught business, physical education classes and coached football and track. As the P.E. teacher, he put together weightlifting equipment and began sharing his weightlifting passion with his students and continued weightlifting as a hobby well into his 50’s. Kelly earned his Master’s degree in Educational Administration during his “free time” and became high school principal in Trenton.

At Trenton, he met Jennifer Sand, a fellow teacher and coach. They married in 1990. In 1992, Carissa Kaye (“C.K.”, to Kelly) was born. That same year, Kelly took a job as the high school principal in Beulah, ND. While principal there he was also the varsity football coach and continued his education by earning his Education Specialist degree at NDSU, while being an attentive dad. Bryanna Rose (“Bry Rose”, to Kelly) was born in 1995.

In 2006, the family moved to New England, ND, where Kelly served as superintendent and elementary school principal. There, he battled and beat stage 4 bladder cancer. He was prevented from continuing the work he loved by the worsening, tragic symptoms of Huntington’s Disease (HD). All through chemo and radiation, as well as a lifelong terminal illness, Kelly never complained. As his disease progressed, he was not bitter. If anything, he became even more affectionate with the people he loved, and his hugs just got that much better.

In 2015, he retired as a principal in Max, ND. He spent his last years at home keeping up on current events, watching his Vikings (he hoped for a miracle every Sunday), playing cards with his family, rooting for his girls in their endeavors, and hanging with Sophie (“Sophie Cat”), the family cat, who he quickly bonded with after retiring.

Kelly loved, esteemed, and spoiled his two princesses, Carissa and Bryanna. He had high aspirations for them, and he believed in them. He continually pointed out their excellence. One day while their mother was away, Kelly’s encouragement shone bright as he supported their daughters in their first business venture: The Tuna Air Freshener. He supervised as the girls set up an assembly line: 1) cut fish shapes out of cardboard and color with markers, 2) punch holes and tie a string through, 3) soak in tuna juice, and 4) add plastic wrap (to retain maximum tuna-freshening effects). Kelly was all for his daughters going door to door marketing them to the neighbors. As the girls returned home with their small profits, he was there waiting with an ear-to-ear grin and hand outstretched for some high fives.

He brought his love of wrestling into the Rasch living room, making it a wrestling room where the girls and all the neighborhood kids, cousins, and friends could wrestle and try to take Kelly down for hours. He’d let them pin him (great acting) now and then, but he’d warn, “You mess with the Bull, you get the horn.” The living room was also a place the girls would play never-ending board and card games and go over school papers with their father. It didn’t matter that the girls weren’t on the football team – they still got an education in weightlifting from their dad. He was often practicing hoops with them, watching their games intently, and giving them their personal highlight reels from memory after the games. As for movie night – anything John Wayne, the Bourne series, or any other action movie, Miss Congeniality, Legally Blonde, and She’s the Man were some favs to watch with his girls.

Kelly was fiercely protective of his girls. When the family first moved to Beulah, some students thought they’d welcome the new principal by throwing eggs at his house. This startled his newborn baby Carissa. Kelly grabbed a baseball bat, ran after the car that was speeding away, and smashed in its window. Articles regarding the incident and the new high school principal ensued.

As an administrator he was tough and effective, but also fair and caring. He was always very supportive of his teachers. He was Southwest Principal of the Year in 2005-2006. At each school, you’d find Mr. Rasch in the hallway greeting and giving high fives to students, forming sincere relationships with many of them. His football players would often be called out of science class down to principal’s office over the intercom, where Coach Rasch would be waiting with cookies to help put on weight and bananas to help prevent cramps.

Kelly will be deeply missed.  He will be remembered for his professionalism, for his s**t talking playing pinochle (“read ‘em and weep”, among many other idioms), for his big heart. He will continue to live on in the many people he believed in and inspired.

In lieu of flowers, the family asks memorial contributions be made to the Huntington’s Disease Society of America (HDSA) at https://hdsa.org/get-involved/tribute-memorial-donations/. This will help support research to find a cure for this devastating terminal disease.