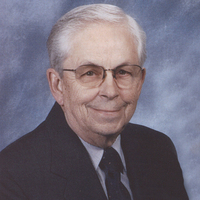 A livestream of the service can be accessed by going to  https://youtu.be/5cGs4YgXzOY

Robert was born May 7, 1930, in Westhope, ND the only son of Henry and Ethel (Vivian) Jensen. He spent his youth in Westhope, graduating with the class of 1948.  He attended college in Bottineau at the ND School of Forestry completing the program in 1950.

He went to work for C & G Furniture for a couple years until he was drafted into the US Marine Corp on January 14, 1952.  He served during the Korean War and was stationed in Japan, returning stateside in January of 1954. Bob was honorably discharged from active-duty January 24, 1954.

Bob was united in marriage to Arlene Slemmen on February 26, 1954, in Souris, ND. After a short time in Denver, CO they moved to Minot, ND.  Bob attended Minot State University completing his degree in 1956.

Bob joined the administration office of St. Joseph’s Hospital for a couple years until joining Minot Federal on December 2, 1957, as a collection officer.  He was named Vice President Controller in 1961 and advanced to the treasurer position in 1964. Bob was named manager of the finance division in 1966, which housed teller operations, along with the savings and accounting departments. Bob was a graduate of the Indiana University Graduate School of Business for Savings & Loan Officers. He was an active member of the National Financial Managers Society and served on several committees within the organization during his tenure. Bob was named Senior Vice President/Treasurer of Midwest Federal on June 1, 1983. In 1987, Bob was elected president of the North Dakota League of Savings Institutions after many years of dedicated service on the Board of Directors and the Executive Committee.  Bob retired from Midwest Federal after 38 years of faithful service on December 1, 1989.

Bob enjoyed fishing, cross country skiing, golf and traveling.  Bob and Arlene travelled in their RV to much of the US and Canada and spent many winters in Arizona enjoying the sunshine. Arlene passed away August 14, 2003.

Bob was a member of Minot’s First Presbyterian Church, serving as a trustee and elder. He served as Chairman of the Heart Fund Drive for several years and President of the Ward County Chapter of the American Red Cross. Bob was active in the Boy Scouts both at the troop level and on the Board of the Great Plains Area Council within the organization. He taught classes sponsored by the American Savings and Loan Institute for many years.  Bob was a charter member and former President of the Magic City Lions Club.  He also belonged to the Elks Lodge, Eagles Aerie and American Legion Post #26, all of Minot.

Bob was preceded in death by his parents and wife of 49 years, Arlene.