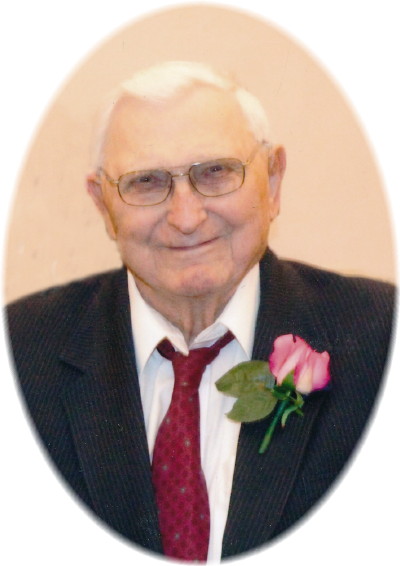 Richard R. Magstadt, 95, Dickinson, died Monday, May 31, 2021 at St. Luke’s Home, Dickinson. A Celebration of Life Service for Richard will be at 10 a.m., Tuesday, June 8, 2021 at Evangelical Bible Church Dickinson with Pastor Tim Privratsky officiating. Interment will take place at St. John’s Cemetery, Hebron. Visitation will be from 5 p.m. to 6 p.m. on Monday with a prayer service and time of sharing at 6 p.m. at Ladbury Funeral Service. Visitation will continue one hour prior to the service at the church.

Richard Roland Magstadt was born on July 15, 1925 in rural Burt to Fred and Magdalena (Eder) Magstadt. He grew up on the family farm, attended a rural country school as well as Hebron High School.

Richard worked as a mechanic at the Pontiac garage in Hebron and on the Burlington Northern Santa Fe railroad. It was during his time on the railroad when he met the love of his life, Arlene Treiber. Richard and Arlene were married on September 24, 1950 in Hebron. He and his bride then moved back to continue work on the family farmstead. To their union, Victoria, Sherry, Lee and Melissa were born.

He was an active and loyal community member, serving in many roles and on several boards. These service positions included being a security officer for Hettinger County for 31 years; Hettinger County Assessor for 45 years; Mott Rural Fire Department for five years with a one year presidency position, Agricultural Stabilization and Conservation Service Board for two years; Odessa School Board for 12 years and on the Mott School District School Board for nine years. Many people, including Richard himself, enjoyed roller skating at the Burt Hall where he served as a security officer.

He lived on the family farm until 1989 when he and Arlene decided to relocate to Dickinson. Richard worked for Dickinson Parks and Recreation for 14 years, and took pride in making sure the city parks and ball diamonds were mowed and ready each week. He particularly enjoyed friendships he made at Parks and Rec while working there, as well as also mentoring the young men he worked with.

An avid hunter, Richard loved to butcher and was quite good at it. He made the best sausage and loved to share with others the fruits of his labor. He spent many hours in his woodworking shop, where he built a replica of his farmstead, hay binders, vintage wagons pulled by horses, and additional wood projects.

Richard loved people, especially his family. He and Arlene welcomed anyone into their home with generous hearts, and no one left a stranger or hungry. He had a great and contagious laugh, and a special nickname for everyone he considered family. He loved to play cards with family and friends and was a great teacher to any rookies learning to play. Richard was loved fiercely and will be dearly missed.