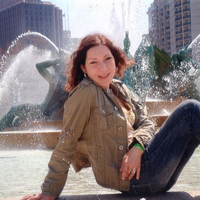 Amy Elizabeth Loos was born on February 22nd, 1974 to Richard and Norma (Shearer) Loos at Kessler AFB, Mississippi. She was raised a military brat, following her father to many different military bases throughout the country. She spent her primary years of education at Goldsboro, North Carolina. She attended high school in Niceville, Florida and Goldsboro, NC, while there was proud of being the water girl for the school football team, and was a part of their ROTC program.

Upon graduating, Amy spent her early college years at Wayne College in Goldsboro, NC where she made many good friends. She later transferred to Oregon State University at Corvallis, where she took an interest in studying Fashion Design and Merchandising. Amy spent her final year of college at North Dakota State University continuing her studies in Fashion.

After her college years, Amy moved to Portland, Oregon where she worked in the retail and clothing industry for 10 years. She later moved to Flagstaff, Arizona and eventually met Bobby Brown, whom was a special friend. Amy and Bobby later gave birth to their son, Brandon Brown, on October 13, 2006.

Amy was preceded in death by her grandparents, Joe and Margorie Loos and grandfather, Jack Shearer.

*Private services will be held later in Montana.