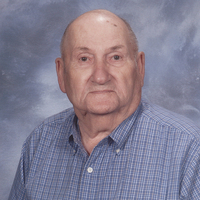 To view a livestream of the service access https://vincentumc.com/watch

Donavon ‘Donnie’ was born November 17, 1923, in the family home in Havana, ND, Sargent County, to Arthur and Anna (Decker) Parrow. He attended school there and graduated from Havana High School in 1941.

He then went to Washington where he worked for Boeing building B17 Bombers. He worked for a time as a mechanic at Thorpe Auto Company in Britton, SD before opening his own business in Havana. He began farming in the Lansford area in 1947 and continued in that occupation until he retired in 1985. Don held many winter jobs during those years, including working on oil rigs and doing carpentry work when the Minot Air Base was being constructed.

On September 28, 1944, Don was united in marriage to Carol Argersinger. They spent many winters traveling in their trailer to California, Texas, Florida, and Arizona.  In 2004, they moved to Minot because of Carol’s ill health. They celebrated 63 years of marriage before Carol passed away in 2007.

Donnie spent many of the years in the late 40’s and 50’s playing baseball for the Lansford Amateurs. He also bowled, golfed and took part in Sunday golf tournaments in the area for many years. He served the city of Lansford for 17 years as a councilman and mayor. In 1986, at a Community Pride Awards luncheon in Bismarck, he received a leadership award for his work in the City of Lansford from Governor Sinner. He and his wife Carol ran the county food pantry in Lansford for over 20 years. Don was a member of the Lansford Amateur Baseball Team, Lansford Country Club, Senior Citizens and a lifetime member of the Elk’s Lodge in Minot.